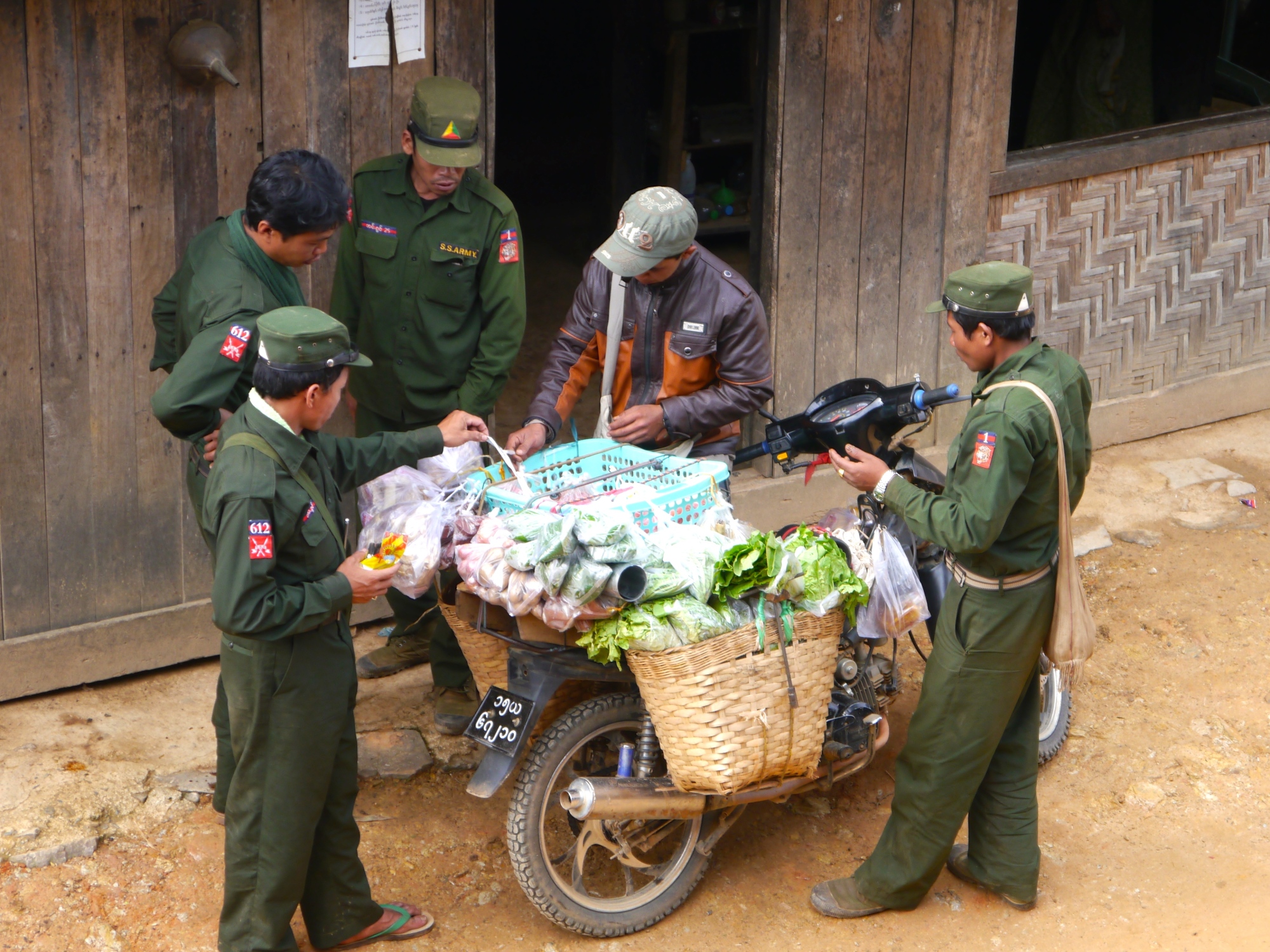 Freedom is the sure possession of those alone who have the courage to defend it.

My travel buddy Chris had been sick in the night. A lot. He’d been sick so much that my attitude towards his affliction changed from sympathy, to mild annoyance after he got some on my bed, and back to sincerest sympathy after 5 more hours of vomiting, during which time he got some just about everywhere in our room.

The torch that he had been using to direct the projectile spews came under constant attack from hundreds of flying beetles. Thus, at 7am when my alarm went off, an eerie battleground of bile and dead or dying anthropods lay before me. While you can only imagine the sound of dozens of waving beetle legs in congealed sick, it will haunt me forever.

The night before, we’d been greeted into the Burmese village with an unappetising feast of cold noodles, a fair amount of ‘Chinese wine’ and some dubious chewing tobacco that made us both fall over dizzily. Whatever it was that made Chris sick, it was clear we would not be starting the final leg of our trek today.

We’d journeyed on foot and by motorbike for two days to reach this point, high up in the green mountains and seemingly utterly detached from the military dictatorship of Burma. These were the hill tracts: home to the forgotten northern tribes.

I went and poured a few buckets of water over myself, shedding the last of the beetles and wondering bleary-eyed what I was going to do all day in a village of about 20 houses and a monastery.

The sun was beating down on the mountainside in that heavy, lazy way that can only be felt in the monsoon season. The jungle in the valleys far below would still be dripping from last night’s downpour.

I donned sandals and headed slowly to the monastery on the peak of the mountain, carrying a paperback and a bottle of water. On the way, I saw a man in uniform. He had a gun. He had grenades. He wore bullets in a belt around his shoulder. He looked at me through his cigar smoke.

We shared an uneasy couple of seconds of eye contact, during which the soldier’s arm tensed worryingly on his rifle, before our guide ‘Moe’ rushed from a house behind me and whispered over my shoulder with barely suppressed glee that it was the Shan forces.

The people who’d been waging a guerrilla war with government forces for decades were here, in a village smaller and less formidable than your average Sainsbury’s.

Had Moe led us into a warzone?

I turned around when the solider let his gun swing from his shoulder once more.

“Are we alright to be here Moe?”

“Yes yes! They just get food!”

“Isn’t this a bit risky though? They have… guns” I said pathetically.

Moe just laughed and pointed to another group of rebels, who were in animated discussion with a nervous-looking vegetable salesman.

Moe danced off to sit and have tea with a moustachioed officer who’d left his handgun over a pack of cards on the table. I was left standing helplessly in the road, with nothing but a copy of War and Peace to defend myself. [1]

I looked back at the first solider. He was grinning at me. He threw his cigar on the ground and resumed his pacing up and down the road.

I rushed back to the sick shack to wake Chris up. His tortured face couldn’t suppress a glimmer of excitement at the news, and he dragged himself out to share in the strangeness of the situation.

On our walk to the monastery, we saw a lot more soldiers: maybe 50 in all. Some walked alone with uniforms undone at the neck, hair matted and dirty and sipping at green tea. Some crouched in gardens with their AK47s next to them and ammo pouches slung over fences, while some stood guard solemnly along the ridge, silhouetted sharply against the blue sky, gun butt and barrel betraying their identities. We passed one chatting into a battered radio. We even passed an old man with an RPG!

Needless to say, we walked to and from the monastery a fair few times, each time trying (and largely failing) to take surreptitious photos of the soldiers. They weren’t keen when we asked.

We settled up at the monastery as the sun began to set. Looking back down the winding dirt track, the many bright green uniforms, military caps and cigars looked oddly familiar. We were in Ché’s South America. We were hanging out with militia.

We were witness to a revolution.

The strange romance of the situation hit Chris and I simultaneously as we perched on a stupa that looked down upon the whole village. Some young monks watched from their windows. The saffron robed monks contrasted with the green uniformed rebels in more ways than one.

Moe joined us, still ecstatic, to tell us that this group moved from village to village, and that the Myanmar army could never nail them down because by the time anyone reported their location, they’d be long gone down a different valley. I didn’t mention that I’d read about villages in Burma, not unlike the one we were admiring, being shelled by the army.

That evening, as the beetles closed in for another bout of suicidal bumbling, a man came into the village’s karaoke room and invited us to meet the village chief. Having steered clear of the wine that evening, we were both quite glad to leave.

The chief, a charming heavy-set man, offered us wine. We accepted and sipped politely (Chris quivering slightly) as he explained to us that it would be best not to mention what we’d seen while we were still in Burma. We agreed and shook hands on it. I felt a bit like I was in the mafia.

As we went to bed that night, I mentioned to Chris that if he hadn’t been so sick, we’d have missed the rebels. We’d have been halfway to the next village.

“Wasn’t worth it” murmured Chris.

1. War and Peace is quite heavy, to be fair.