Capital of the old Thai Empire. Translating as dawn of happiness. Home to a hooligan semi-professional football club. Something doesn’t fit.

Located between Chiang Mai and Bangkok, Sukhothai is most famous for its historical city which is remarkably well-preserved. We reached this place by bus late at night having been kicked out an agonisingly 10 minutes before the end of Hansel and Gretel – one of those so-bad-it’s-good films.

Bright and early the next day, my travel buddy and I set off for a full day’s cycling around the landscape of Sukhothai’s historical park. It was mesmerising. 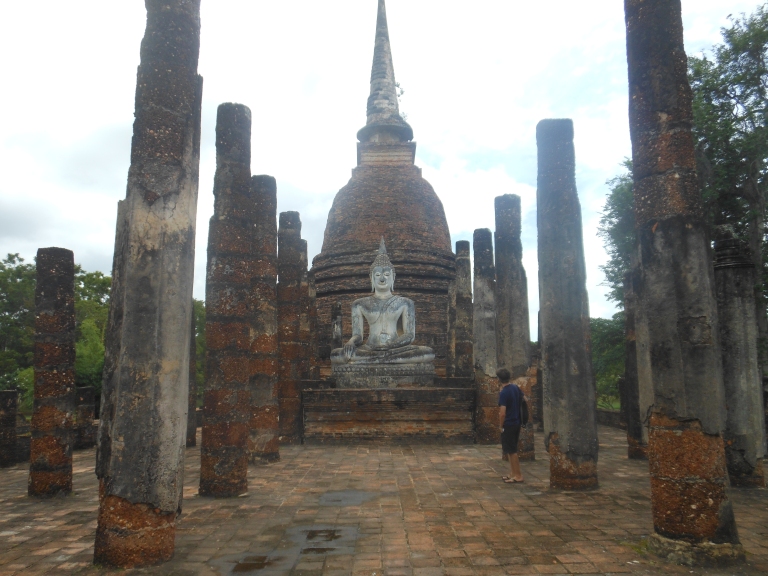 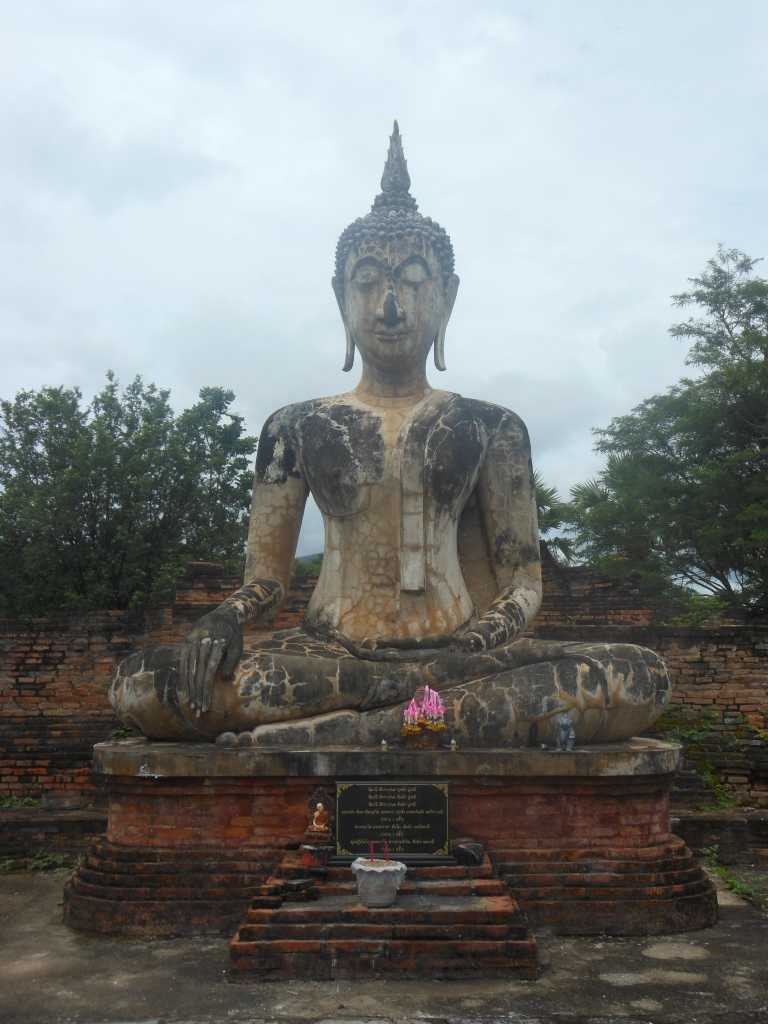 The sheer size of the chedis and statues of Buddha were amazing… I can only imagine how it would have looked like almost a thousand years ago.

After a day of admiring the park (as well as the various hot European tourists), we began to cycle back to the hotel. On our way, we traded insults with local kids, keen to show off their command of the more vulgar side of the English language – seeing a tiny Thai kid shout “hey you, suck my dick!” and then grin when you shout ‘fuck you!’ back is quite something. We expected that to be the most fun part of our day, having experienced Sukhothai’s ‘nightlife’ the night before. But just before we arrived at our hotel, we were held up by a procession of pick-up trucks filled with people wearing orange shirts waving flags and shouting down megaphones. We saw the flags were advertising a football match and got excited by the prospect of there being a local game of seemingly huge importance – could we figure out a way to get there?

We dropped our bicycles off and asked about the procession. Aha – there was a game on!

No matter. We jumped in the back of one of one of the pick-up trucks and off we went. We hurtled down the motorway in the back of the truck, being beeped at, pointed at and cheered at by the rest of the travelling army. Game on.

We pulled up at a school’s athletics ground and said our kop kun kaps to the family who drove us and picked our way through the crowd. There were thousands of people! What was going on? We found a small ticket counter and paid our 50 baht, bought a shirt each, seeing as all the locals had them and head inside the Bat Cave, as we later found it was called.

We hadn’t been in the ground for ten seconds before an excited man scrambled over to us.

“Hey, I’m Tony! I’m Sukhothai’s biggest fan! Where are you from?”

“England?! Not this stand!”

“You are English… you go to the hooligan stand!”

Not that England’s hooligan reputation has made it all the way to Sukhothai… did he really just suggest this second-division football team had a hooligan stand? Fantastic!

With a skip in our step, we made our way over to the hooligan stand, obviously keen to start ripping up plastic chairs, putting scarves over our faces and doing whatever other general-riot-behaviour we were expected to do. We weren’t sure – the idea of discussing the merits of a diamond midfield over craft beer has always appealed more than getting a Millwall FC season ticket.

The stand was a hive of awesomeness. Flags, drums, megaphones, scarves and loud singing added to the atmosphere. We grabbed a couple of beers and let the occasion wash over us.

After standing for the king’s anthem, facing an empty flagpole, the game got underway. After two minutes, it was obvious Sukhothai were far, far better than the opposition, Tak. I genuinely think I’m better than half the Tak players! Sukhothai also had some nifty Brazilians causing mayhem on the flanks and a carbon copy of Yaya Toure dominating the midfield. How did they procure such talent?

Sukhothai eventually ran out 3-0 winners, although it could have easily been a lot more what with missed penalties and dozens of wayward shots. Throughout the game, the fans were in boisterous spirit, but it was after the final whistle that we really began to see why it was called the ‘hooligan’ stand.

Fans streamed onto the pitch, the drums started up again and two dozen flares were lit. We followed onto the pitch and confirmed that the best player on the pitch was indeed a Brazilian called Ribeiro. Being the only two tourists in the entire stadium, we also caught the attention of the paparazzi and posed for a few photos before discussing the state of the pitch as we trampled over it.

After we had our fill of post-match shenanigans, including high-fiving various players and sniggering at the opposition in their see-through changing room, we hitched a lift home and went for some dinner. Unbelievably, we bumped into seemingly the only other farang around… he was also wearing a Sukhothai shirt! Turns out he taught English at the local school. Missing his beloved Birmingham City, he adopted Sukhothai as his new team. We shared a few beers and discussed the match, amongst other things – such as his devious trick of putting food colouring in his beers at the game so his students didn’t see him getting sozzled. He told us how Sukhothai could afford such good players – it was something to do with Thaksin Shinawatra and sounded positively illegal. Perhaps sensing we were loyal Sukhothai ultras, he invited us to a secret out-of-town afterparty for the fans and players. Yes please!

We made our way there and were immediately out of place. We ordered beers and chatted with various people, including Tony, who had made a beeline for us. The live music was great, although we were spared from any awkward dancing as we posed for photos with local fans who must have mistaken us for Sukhothai’s international players. We played a game of cat-and-mouse with the ladyboy suitors (seriously, they are everywhere), although this game got progressively harder to win as the beers kicked in.

With one eye on leaving the city the next day, we head back into town and laid our heads to rest. We woke up the next day dizzy with fond memories, slightly baffled at what just happened and dizzy generally, thanks to all the beer. What an odd day – that such a small city could be so football-obsessed, welcoming and vibrant. It looked a total shithole when we first arrived!

One thought on “Becoming a Sukhothai Ultra”